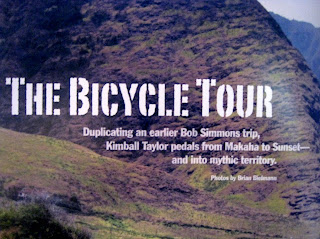 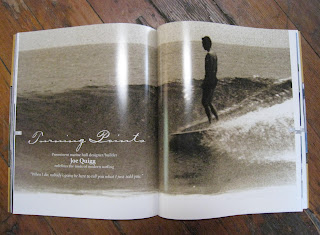 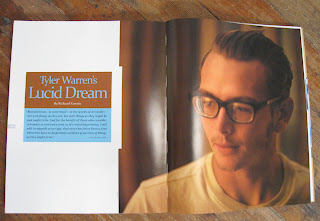 Surfer's Journal 20.6:
Excellent piece by Kimball Taylor on Simmons on Oahu in 1953, Quigg on Simmons, Kivlin and who did what first in the late forties at Malibu from a 1997 interview, RK piece on planing hull master stylist Tyler. Warren.
Posted by hydrodynamica at 7:03 AM 1 comment: 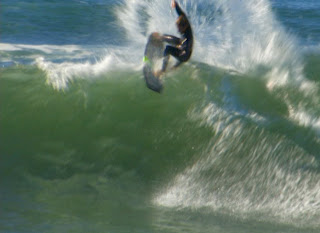 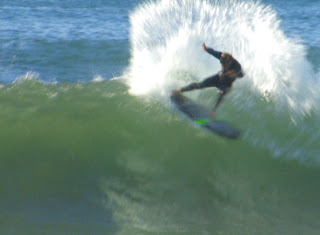 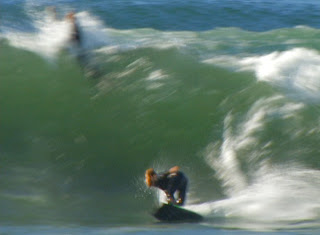 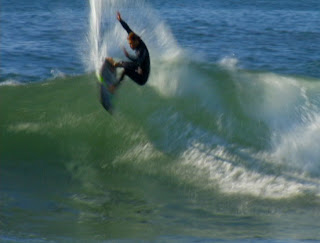 Posted by hydrodynamica at 5:46 PM No comments:


I've been hanging with Daniel recently, getting a full update on his latest applications of Simmons concepts to ultra-progressive design. Daniel recently won "Best in Show" at the Sacred Craft surfboard exposition/gathering with this particular design, which is the closest to his ideal of performance yet. (It was his second win at Sacred Craft) Yesterday morning we met up at a little reef/sandbar known locally for its junky unpredictabilty. There was one kid in the line-up, he was riding a bellyboard of his own design. He came out of the water and gave a full break down on his concepts. His inspiration? Simmons. I didn't catch his name...so for now he's known as the Prestwick Kid. This beach is where Simmons rode his last wave...its were Butch Van Artsdaalen rode Al Nelson's little 5'6" twin fin in 1957...it's where Nick Mirandon and Chris Prowse blew minds in 1967 on twin-pinned spaceships, and a stone's throw from Big Rock,
where Steve Lis did the same on his Fish. Its where Ekstrom rode his asymmetric in 1965.
Its funny, even in those times the status quo resisted. But the guys with the new stuff? Too stoked to care. Its the same today. Daniel went out yesterday and took what the ocean offered up, and had a blast. His board has carefully applied concepts, heavily inspired by Simmons,
and the more Dan feels it working the more frothing and stoked he gets. As for the Prestwick Kid? Keeping an eye on him for sure.
Posted by hydrodynamica at 9:12 AM 2 comments: 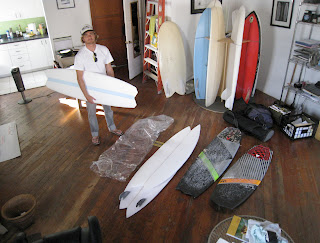 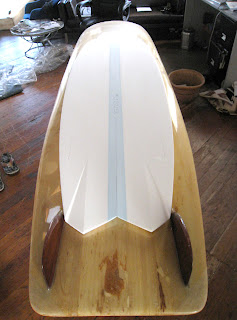 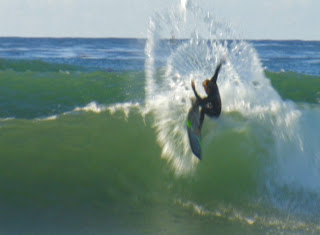 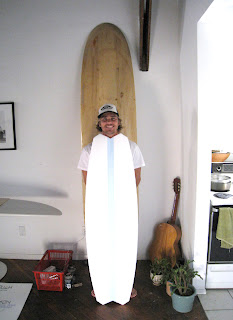 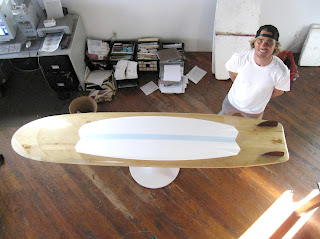 Posted by hydrodynamica at 9:10 AM 2 comments: 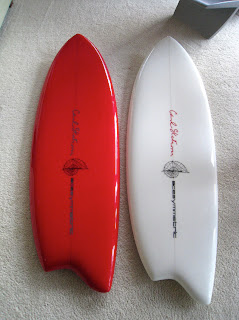 "The derogatory term "finish fetish" was devised to patronize those artists, who were deemed superficial for their excessive concern with surface. But that in itself was a superficial observation: it was only if the surface was perfect, the counter-argument went, that deeper resonances in a work could be observed.

..."Finish fetish" might have been a movement of it's time but also expressed a more timeless artistic concern: the desire to create a kind of perfection.

But we know, in our relativised age, that there is no such thing. The yearning for flawlessness will always be compromised. 'Gray Column" movingly tells this story. Its otherworldliness is, after all, of the world. Its hypnotic translucence might captivate us but we are not in the presence of 2001's monolith. Its ulterior concerns are human, all too human."

Photo: Pair of new hand made boards by Carl Ekstrom, who freely admits his obsession with surface and finish.
Posted by hydrodynamica at 6:23 AM No comments: 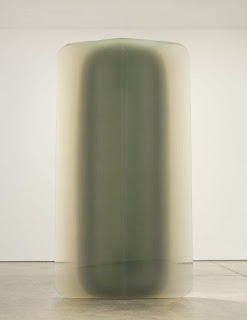 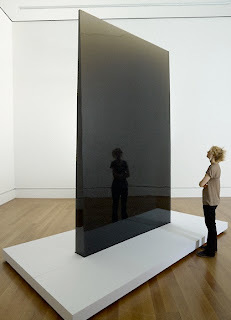 "Gray Column" is a hefty sculpture made by the Colorado-born artist De Wain Valentine in the mid-1970s. It is shortly to go on display at the Getty Center in Los Angeles and will doubtless evoke some memories, not because anyone has seen it before - it has never been shown in public - but for its striking resemblance to the black monolith in Stanley Kubrick's 2001: A Space Odyssey. If the Getty produces a soundtrack of waltzes to accompany the display, the association will be complete and we will be whisked back to a time that dreamt vividly of a future that has yet to happen.

But there is a more prosaic point to the show than to promote temporal dislocation. The display of"Gray Column" is presented by the Getty's conservation institute and the work will be surrounded by exhibits that narrate the story of its making and maintenance. Valentine's achievement was as much an act of technical bravura as imagination. The 3500lb sculpture, 12 feet high and 8 feet wide, is made entirely out of a single pour of polyester resin, using a new technique devised by the artist and a local manufacturing firm.

The result is a smooth, highly polished work that tapers at the top to become translucent, a hypnotic visual effect. In common with other artists of the time working on the west coast, Valentine was fascinated by the finish that was being achieved in the aerospace and car industries. Even surfboards - what could be more Californian? - attracted artists for the sheen of their surface as much as for their symbolic power, speeding metaphors for the free-flowing lifestyle of LA beach culture.

"Gray Column" is part of Pacific Standard Time, a series of exhibitions opening next month on the birth of the LA art scene. Valentine in many ways was a typical player on the scene: innovative, unafraid of pushing boundaries, exalting in scientific advances of the time..."

- from "A perfect realization" by Peter Aspden published in the Arts section of the Financial Times September 4th 2011.
bottom photo 'Gray Column"
top photo 'Diamond Column"
both polyester resin sculptures by De Wain Valentine
Posted by hydrodynamica at 7:43 AM 4 comments: 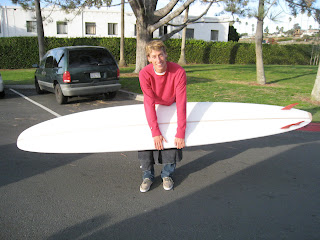 Burch with his 11' plus asym.
Posted by hydrodynamica at 10:13 AM No comments: