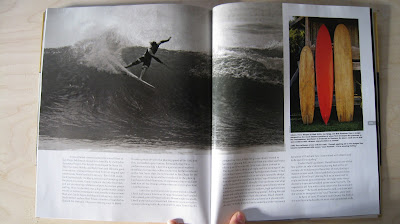 This is a correction for the board identifications/credits for the photo at right of the three boards in the piece I wrote on Daniel Thomson that is in the current issue of the Surfers Journal. The credits were printed incorrectly by the Journal. It should read from left: Quigg, Kivlin, Simmons. Apologies to Joe Quigg and Matt Kivlin for this error. I've also included text below that was edited out of the piece that puts the photograph in context, which is that just about everything that became the "modern" board of today existed in the minds and designs of Simmons, Quigg, and Kivlin long ago. I love the photograph because seeing their designs side by side clearly shows this. Boards are collection of Fernando Aguerre, photographed by Ryan Field in 2007.

"But there is something that tends to shadow and confuse Simmons’ design legacy. The fact is that he built a lot of wide tailed single fin “spoons” for surfers who preferred one fin. The single fin Simmons spoons were planing hulls in every respect but they lacked the crucial element of outboard fins that gave the design its directional stability and control. Instead, these boards had a single keel fin plopped down in the middle of a big wide tail.  Compared to the dual fins they didn’t work very well. They were unstable in turns and the spoon nose hindered the riders ability to “walk the board”, something that was becoming important as surfing moved towards the cross-step and nose ride era of surfing. Simmons made little or no effort to modify his boards to accommodate a single fin or allow a rider to walk up to the nose. Simmons was passionate about evolving the planing hull, but he had no interest in evolving the single fin. To improve the single fin by pulling in the tail and adding rocker meant discarding nearly every design element that made the dual finned planing hull work. He left single evolution to others and stuck to his theories.

Years ago Simmons and Bev Morgan experimented with a six foot board. Simmons explained to Morgan that the board would need dual fins to work, but Morgan insisted they should try it as a single fin. Rather than modifying the design as a single fin, Simmons then suggested they should keep the dual fins but add a third fin to satisfy Morgan’s wishes. In effect, he was only willing to modify a dual fin. He wasn’t adding two fins to a single fin, he was adding a third fin to a dual fin. He could add a third fin and the board would still function as a planing hull, but if he removed the outboard fins it wouldn’t work. At any rate, Morgan insisted on a single fin and Simmons gave in. After winning the battle of wills with Simmons and getting his way with a single fin it turned out that Morgan didn’t like the board at all. 55 years later Morgan freely admitted that ‘Bob was right, of course. It should have had two fins at least.”

The short comings of the single fin Simmons spoon would inadvertently help propel the popularity of the Malibu chip, a single fin design that would prove to be the nemesis of the planing hull. The Chip was the flip side of the two Malibu design schools. Its proponents were just as passionate about making better surfboards as Simmons was. But where Simmons followed hydrodynamic theory, they followed intuition, working within the confines of an emerging performance criteria that they themselves were creating. They “walked the board” and used tail pivots and stalls to stay close to the curl, setting up forward trims on the nose and “hot dogging” the wave. Their style was heavily influenced by the point waves of Malibu and the hot curl surfers they had seen in Hawaii, like Rabbit Kekai. They admired the sleek lines of the hot curl boards and the single fin was central to their philosophy. They had no qualms about breaking Simmons’ rules and opposing his theories in order to make their boards work better and improve their way of surfing.

The Malibu chip had rails borrowed from the Simmons planing hull, and there were some similarities in the outline, but beyond that the two designs had little in common. As the chips evolved over time they moved further and further from Simmons. Since chip innovators like Joe Quigg were not bound to Simmons’s planing theories they were free to make the tails narrower, add rocker, and flatten the nose by getting rid of the spoon. These boards quickly surpassed Simmons’s single fin spoons as the board of choice for hot California surfers on the cutting edge of the rapidly evolving  “hot dog” style of single-fin surfing. By the mid-fifties the best surfers on the coast rode boards from the single fin chip school.
In 1949 Bob Simmons, Joe Quigg, and Matt Kivlin all worked together in a space in Venice. Odds are the board Simmons is riding in Prosser’s photo was built there. Nearly every element of what would evolve into the modern board of today , including construction processes, existed in its embryonic state in the minds and boards of these three men in 1949. But Simmons, with his dual fins and wide tails, was on one side of the spectrum, and Quigg and Kivlin, with their single fins and narrow tails, were on the other. Their design philosophies were conflicted and never merged in their time."

(this text was edited out of Daniel Thomson and the Speed of Phi, TSJ 22.2)
Posted by hydrodynamica at 11:11 AM No comments:

Drove from New York to Pittsburgh with Blaine Vandenberg to see the film in June 2008.
No surfer that I knew of had ever seen it. They had seen Andy Makes a Movie, but not San Diego Surf. We had to make an appointment, and were ushered into a little viewing room with security cameras everywhere. We watched the film on an old 19” computer monitor. There were no plans to release the film at that time, and it seemed there was little interest in it.


My interest? Read everything Warhol & crew wrote for years, saw films like "my hustler" (truman capote in a beach chair on fire island with perfect offshore tubes in the background) at Whitney in the 80s, heard the stories of Carl Ekstrom making boards used in Warhol's surf film...one was asymmetric. Never met anyone who had actually seen the film. Primary interest was pop culture in relation to Simmons, Ekstrom, board design...1966-1968 in La Jolla = Steve Lis Fish, Ekstrom asymmetric, Mirandons Twin Pin. Interesting stuff to me.

Tom Wolfe writes about Simmons and Windansea in '66...Warhol shows up in '68, uses an Ekstrom board, to La Jolla, mind you, Windansea, both of these guys. Not Malibu, not LA, but Windansea.  Struck me that both of these hipster kings of pop were way on the outside of a nut they couldn't crack when they showed up here and used the place as subject matter for their work. So saw the film for those reasons hoping to license some footage for effect for segment on late sixties in La Jolla. Foundation was saying there were doubts, legal etc, about being able to license any. My resources were slim.

The film:  Warhol soft core with male homosexual overtones, campy surfsploitation, extremely funny in places, has themes of that are awesome satire of everything in surfdom: competition vs soul, golf vs surfing, gay vs straight, etc etc etc.  plot: married couple viva (or Ingrid?) and taylor mead move to la jolla from the east. taylor coming out of the closet, viva not getting any. house on beach surrounded by bronzed surf flesh of both sexes. taylor uses surfing as means to hook up with boys and crack california society. viva is drunk and bitter and wants to hook up with the boys surrounding the house...the boys are happy with the girls, and taylor just keeps chasing the boys through his "interest" in surfing. viva opens film with monologue about how "all surfers are repressed homosexuals" so viva (Ingrid?) and taylor are just frustrated the whole time.  film ends with taylor getting a golden shower while standing on the ekstrom board screaming"i'm a real surfer now!"  which was worth the drive to Pittsburgh for me. 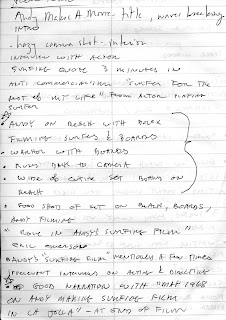 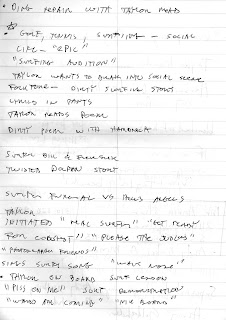 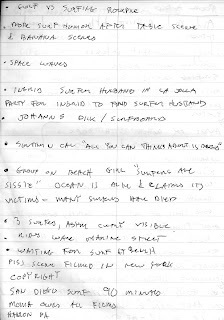 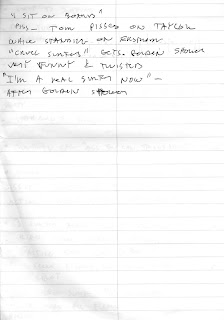 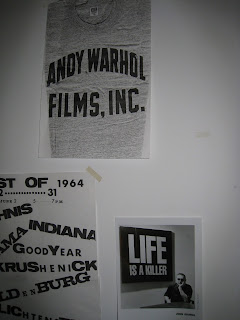 San Diego Surf has now been released, going with Carl to MCASD this Saturday to see it again. It will be the first time Carl has ever seen it. 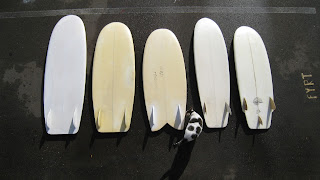 All boards were made for the Hydrodynamica project at my and John Elwell's request to explore and acknowledge the design contributions of the shapers named above and to begin our own applications of Simmons theory to modern boards.

Posted by hydrodynamica at 9:13 AM 3 comments:

Heliocentric model of the Heavens. 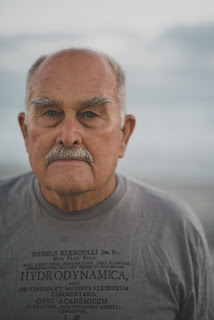 John Elwell with dual keel modern planing hull shaped by Daniel Thomson. Photographed on September 27th 2012 near the spot where Elwell first met Bob Simmons in 1949. Being neither an outstanding surfer nor a shaper, John faced an uphill battle defending and acknowledging Simmons' legacy.  If not for John we wouldn't know anything about  Simmons and the dual keel hydrodynamic planing hull. Elwell brought Simmons back into surfing, not just for Simmons' past accomplishments and contributions, but for his relevance in the present. Largely because of Elwell, young shapers like Daniel Thomson have a very specific and clear first-hand understanding of Simmons' basic formula. And the boards, whether they've got two fins or five, just get better and better. Photos by Doug Wylie.
Posted by hydrodynamica at 8:32 AM 1 comment: