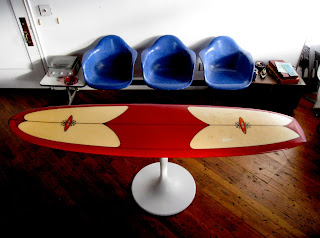 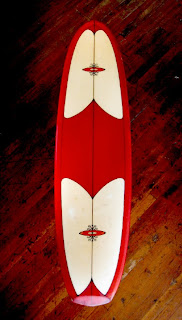 Gathering boards for PST exhibit. This is a symmetrical Ekstrom V-bottom from '68,
a "control" board to be shown with Mirandon Twin Pins. Note the swallowtail motif in
the pinlines. Collection of Mike Bonaguidi.
Posted by hydrodynamica at 8:38 AM No comments: 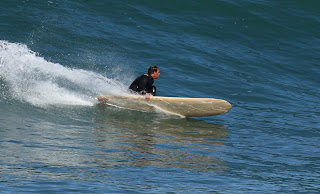 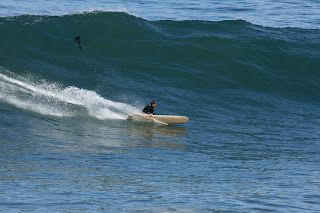 Simmons theory in action: dynamic lift generated by high and low pressure along the leading edge of the foiled rail, guided by two small directional stabilizers placed along the rail where pressure is highest. Trans span flow diagonally across the bottom of the board like an aquatic airplane wing. Board is 35 lbs and made of solid wood, yet it is on a rail and accelerating rapidly. Explain what is going on here and you will explain a lot about the foundation of modern performance surfboard design.
Posted by hydrodynamica at 8:47 AM 2 comments: 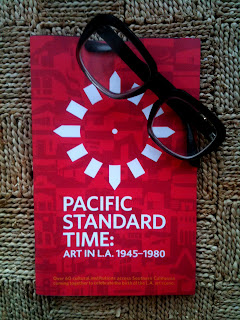 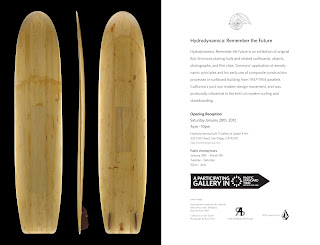 "Pacific Standard Time is a collaboration of more than 60 cultural institutions across Southern California coming together to celebrate the birth of the L.A. art scene. Through the exhibitions of Pacific Standard Time , you can discover how the Southland became a great center for art and culture." - from PST exhibition guide.

A few months ago I went with Carl Ekstrom to inspect two pieces of his that were installed at the Mingei Museum for something called Pacific Standard Time, which is a massive collaboration of Southern California cultural institutions initiated by the Getty Research Institute in Los Angeles. I went home and did some research and found that the Getty had been working on this massive joint effort for 10 years. They were on a mission to define and contextualize art and culture in Southern California from 1945-1980. The scope of Pacific Standard Time was broad: ceramics, conceptual and perceptual art, cultural identity and politics, design and architecture, the history of art spaces in Southern California, painting and sculpture, performance art, and photography and print making.

I then learned from John Van Hammersveld that PST was accepting proposals from independent galleries. So with two days left before the submission deadline I rushed together a proposal that focused on the work of Bob Simmons, Carl Ekstrom, Steve Lis, and Nick and Bear Mirandon...all of whom did their thing within the time frame of 1945-1980. I sent the proposal to the Getty. A month went by and I almost wrote it off. Then I received an email congratulating Hydrodynamica on being accepted to participate in PST.

I see this as an opportunity to continue telling a story, through surfboards and surfing, that had a tremendous impact on cultural identity in society and on the lives of individuals. Not just in California, but everywhere. Context is everything. If the story of surfing is only told from the perspective of "sport" we miss out on an incredibly rich saga filled with individuals who pioneered not just new ways to ride waves, but new ways to live. PST is a chance to acknowledge the role surfers played in Southern California's creative realm during those years.

The more PST exhibits I visit the more I see a narrative and a story coming into focus. The forms and materials of post-war modernism in California from 1945 through the 1970s were used by surfers and reflected back to and absorbed by artists, designers, architects...and vice-versa. There is a relationship between a 1948 Simmons planing hull and a 1948 Thomas Church swimming pool. Look and see. Aerodynamic form. Curves and lines. There is a relationship between the monolithic polyester resin sculptures of Dewayne Valentine and the monolithic resin laminated boards of Simmons and Quigg. Surfers were not bit players in this drama of mid century California culture. They were in leading roles alongside the Shulmans, the Eames', the Churchs, and the rest of the cast...

Los Angeles has always felt shadowed by New York in the realm of art. PST is an attempt to come out of this shadow. San Diego is in an even deeper shadow cast by Los Angeles. But look into the story of surfing in Southern California from 1945-1980 and you will see intense interaction, especially in the 1940s and 50s, between San Diego and Los Angeles, particularly between Malibu, Windansea, San Onofre, and the Tijuana Sloughs...and where did these guys turn their attention? To Hawaii...and that's real root of all this stuff. Surfing in California came from Hawaii, and eventually went back to Hawaii transformed by post war materials like resin, foam, and fiberglass. George Downing and Bob Simmons patching a board together in L.A. in 1948? It happened...one of many milestones from that time. Could write a book about that one alone.

Support from friends at Volcom is helping to make this possible :)
Posted by hydrodynamica at 7:28 AM 4 comments: 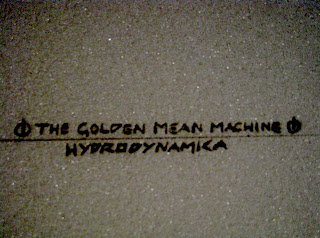 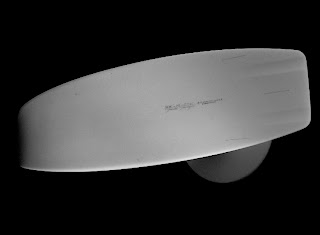 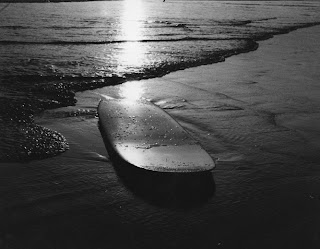 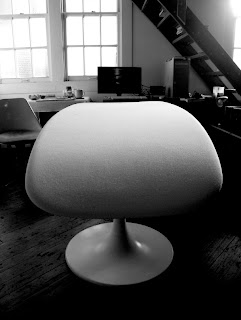 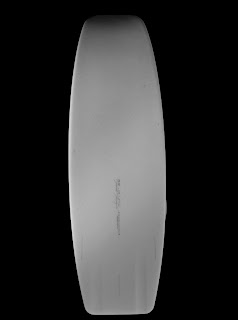 The Golden Mean Machine. Shaped by Daniel Thomson for the Hydrodynamica Project 12/14/ 2011 middle photograph of 1950 Simmons Motherboard by John Elwell.
Posted by hydrodynamica at 8:41 AM 2 comments:

DT & the birth of the golden mean machine... 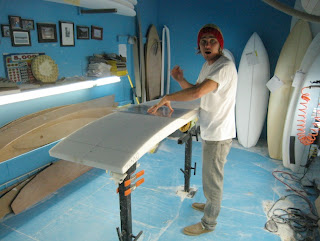 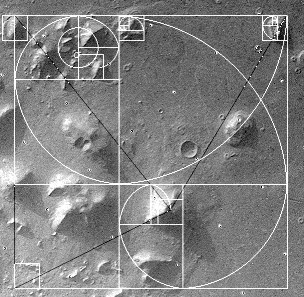 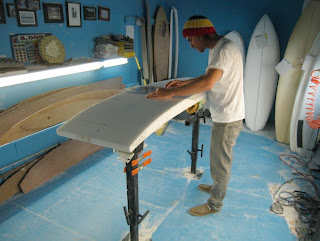 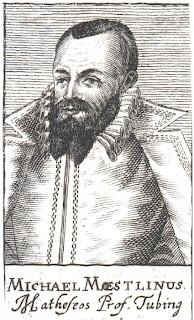 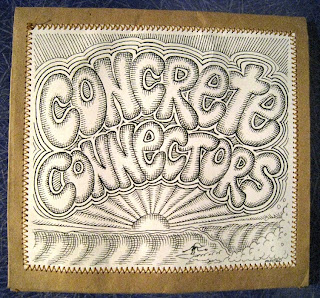 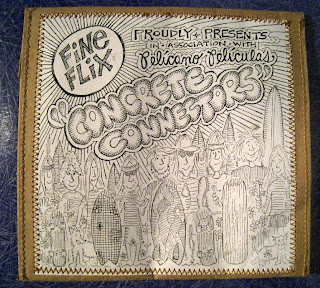 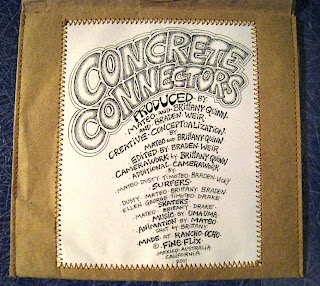 'cause connecting is good...
Posted by hydrodynamica at 9:03 AM 1 comment: 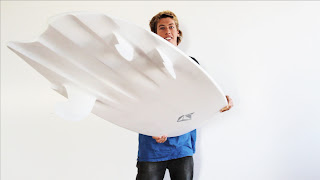 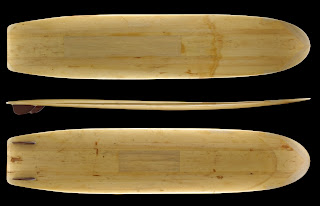 1950 Simmons planing hull photographed by Ryan Field.
Posted by hydrodynamica at 8:25 AM 1 comment: 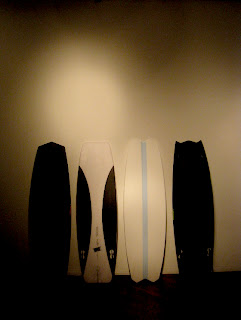 Posted by hydrodynamica at 8:43 AM No comments: 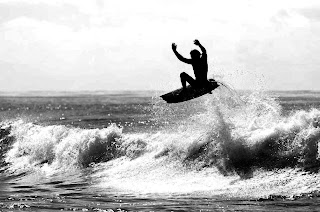 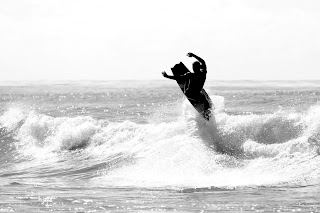 DT: 3 steps ahead of the Jokers. photos by Dave Frankel
Posted by hydrodynamica at 4:02 PM 6 comments: 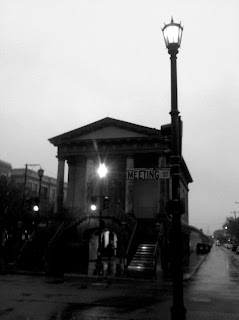 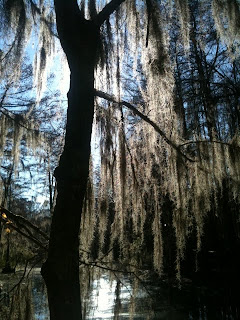 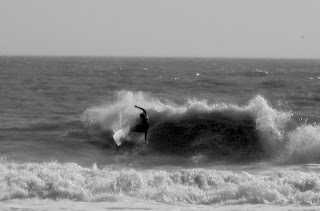 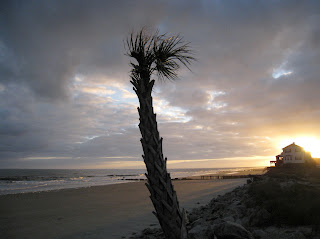 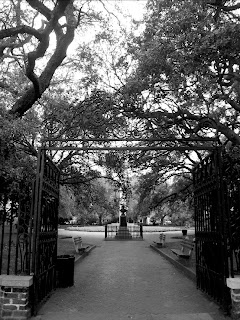 Posted by hydrodynamica at 8:29 AM 3 comments: