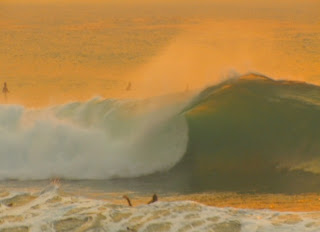 Simmons still haunts this reef in La Jolla...
Posted by hydrodynamica at 8:11 AM 1 comment: 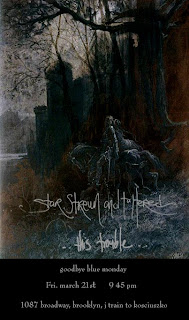 This Friday in Brooklyn...
Posted by hydrodynamica at 6:04 PM No comments: 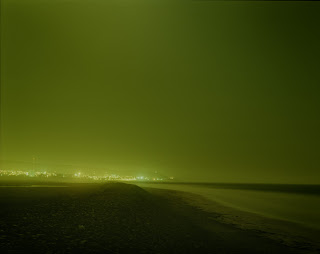 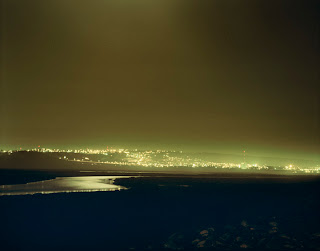 Journeys end at the rivermouth.
Photos by Ame "Street Taco" Curtis
Posted by hydrodynamica at 5:52 PM No comments: 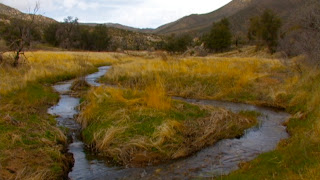 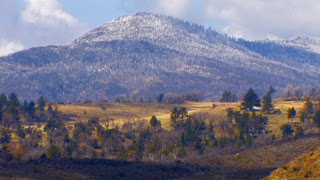 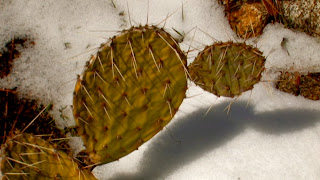 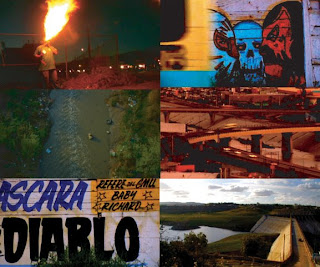 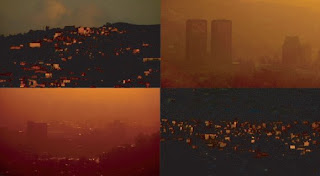 Yesterday, March 16th 2008, was one of those pristine late winter days...
a cold low had passed overnight with pounding hail and thunder.
The Field Marshall and I decided to trace the northern drainage of the
Rio Tijuana from the mountains east of San Diego, across the border
at Tecate, and down into the Blade Runneresque metropolis of Tijuana.
We made really good time, as the roads follow the drainage, and water
seeks the fastest way downhill. Here are some images from the trek.
Posted by hydrodynamica at 10:30 PM 3 comments: 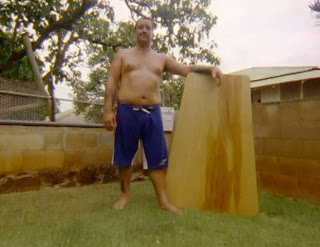 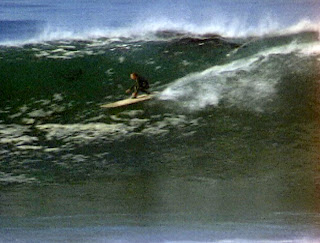 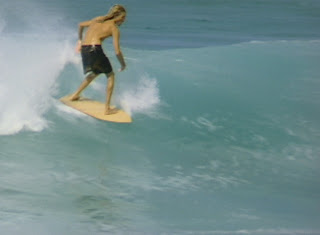 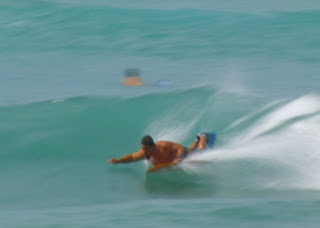 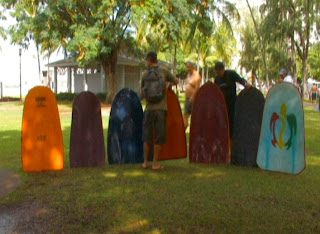 Reno and the Paipo quest 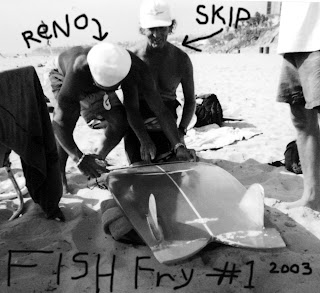 Here we have a pic I snapped in September 2003 of Reno Abellira
and Skip Frye at the first "Fish Fry" gathering. Reno was living
with my brother Peter at the time. My brother and I had both
grown up in awe of Reno's style...Peter's surfing style is very
Abelliraesque...So the fact that through serendipitous events
that are far too complex to go into now...the two ended up
as roomates for awhile. Anyway, Reno was the first interview
I did for Hydrodynamica back in 2003. He asked what I wanted
to start with and the first thing i said was "PAIPO." Reno proceeded
to break it down...Val Ching, Wally Froiseth...et al. For the next
five years we spent considerable time and energy documenting
the links between the paipo, the Lis fish, and the Simmons
hydrodynamic planing hull. We interviewed Wally Froiseth and
Valentine Ching...Tom Morey...Tom Henry...Ray Jr Hookano...
Peter Pope... Rabbit Kekai...I want to thank them all for sharing
something very personal and sacred with us. Above the
Skip and Reno pic are a few frame grabs from our paipo quest...
Posted by hydrodynamica at 8:28 AM No comments:

Mickey Munoz drops science on y'all... 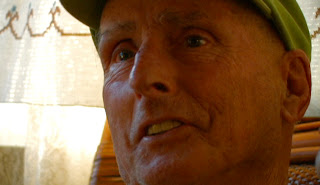 Excerpt from Hydrodynamica interview with RK on 3/9/08:

"Shaping and designing has always been a balancing act between creating
speed and controlling it. Long and narrow is not necessarily faster, its just a
way to control speed, somewhat...short and wide is very fast, but very difficult
to control. I remember watching paipo guys at Waimea years ago...the paipo
board was basically a triangular piece of plywood with the corners turned
down in the tail which gave you a fin like appendage...they had a big wide
planing area...the guys just hung on prone, low center of gravity.

Buzzy Trent would take off on a 25 foot Waimea bomb, rocketing down the
face on an 11'6" elephant gun, a radical, drawn in gun...and these guys on paipos
would take off behind him and just rocket past him like he was standing still...
....So, you had Simmons on the one hand with this sort of paipo board, if you will,
only extended so he could paddle into waves, but if you were to cut it off three
feet from the tail it'd be a paipo board...and then on the other hand you've got
someone like Matt Kivlin who was this graceful, powerful surfer on a more
drawn out board, more like a gun, like Buzzy's elephant gun...
So as those opposite designs evolved, y'know, the modern thruster, fish,
quads, five fins...all of these combinations are basically just trying
to get that original paipo board under control."
Posted by hydrodynamica at 7:08 PM 4 comments: 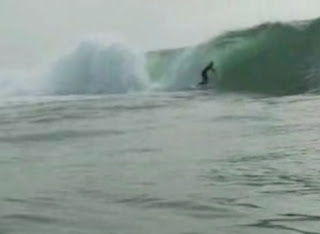 This here is the mythical Ian O'Roarty...aka BLACKWATER...
poaching a magic session at Matuse Cove on a less than optimum
tide a few days ago...doing stunt work for an Italian film production no less...
pretty much a typical day for Igor. He'll be filming Dennis Hopper
next week...no shit...anyway, Ian scored this day.
He has also helped tremendously with Hydrodynamica...
Look for more Blackwater updates in the future.
Posted by hydrodynamica at 6:52 PM No comments: 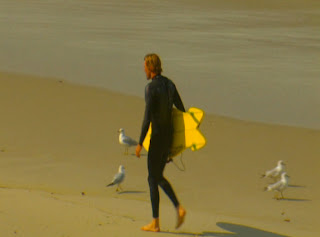 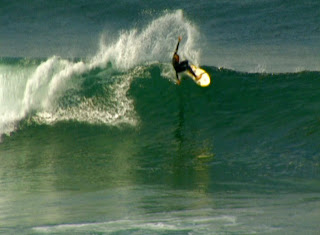 This is Eli Mirandon surfing a board he designed with his father Nick Mirandon,
inspired by Uncle Bear's side cut experiments circa 1970...a porpoise board.
Eli rides the board in a...shall we say...progressive manner. Aerials...whatever,
he can do anything on it.
He is shown here on 3/12/08 riding the left at Windansea where Nick watched Butch Van Artsdaalen
rip Al Nelson's 5'6" Simmons inspired balsa dual fin 50 years ago...
the evolution continues...if those lefts could talk.
Posted by hydrodynamica at 9:27 PM 3 comments: 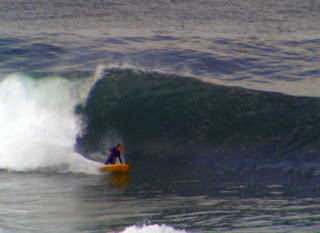 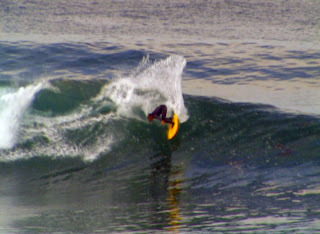 a few more pics from yesterday at the good ole TWANG in La Jolla...
trusty 5'7" keel fish from the GURU...getting a little delaminated
but still works
Posted by hydrodynamica at 8:47 AM 2 comments: 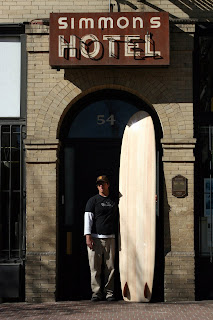 This is the 9'0" Simmons balsa dual keel that Terry Martin shaped for the Hydrodynamica Project in
2005. A beautiful, functional surfboard...Terry did a masterful job...he brought Simmons to life for us and
we are grateful for that!
Posted by hydrodynamica at 8:15 AM No comments: 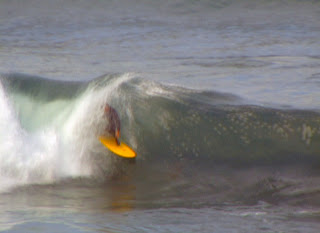 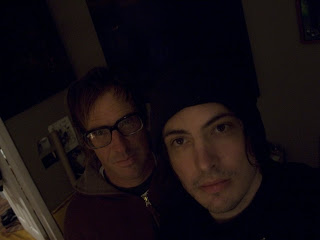 Here be the first post for Hydrodynamica blog...two random images from recent activities...
an inside left bowl from yesterday at a La Jolla reef on the trusty 5'7" keel fish yellow shaped by the
illustrious globetrotting GURU...you know who, right? and...a snapshot of me and Pedro in his
studio in NYC on 3/1/08...to see Pedros paintings visit www.peterhalasz.com
i am new to this blog shit so i guess i'll figure it out as i go along....

today my work will be digitizing and logging two interviews we filmed on Sunday March 9th 2008...
namely Terry Martin and Micky Munoz, two eloquent and articulate ambassadors of true stoke...
A huge honor for them to take the time to share their experiences with me. Terry's wife Candy
(she happens to be Micky's sister!) was gracious and served delicious papaya and mango, and Mary cooked her delicious lumpia with her usual love and aloha. Timmy Patterson stoppped by with a vintage 72 Munoz singlefin,
a beautiful board...this group is very close...Terry showed me pictures of Timmy when he was baby...
These guys are all close friends, neighbors... master craftsmen, innovators...and all touched in their own ways by
the work of Bob Simmons long ago. Terry Martin is an OG Sunset Cliffs guy...he pioneered Osprey Street.
Posted by hydrodynamica at 7:39 AM No comments: